By Government of Gujarat Pvt. While teachers across the state are in the mood to agitate against the government for blocking the promotion of teachers to education inspectors and reducing grade pay, demonstrations were held in Vadgam taluka of Banaskantha with posters in hand to protest against the injustice done to them by primary teachers. In which the study of 500 grade pay for the teachers recruited in the year 2009 and 500 grade pay for the recruits of 2010 was strongly opposed. In which, if the government does not resolve the issue of education inspector and 500 grade pay to the teachers in the next one month, the teachers threatened to organize a picketing program in Gandhinagar along Gandhi Chindya Marg. 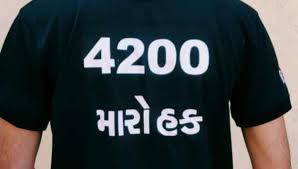 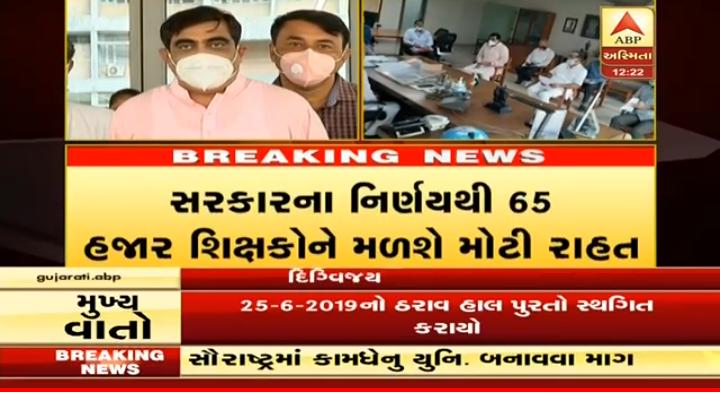 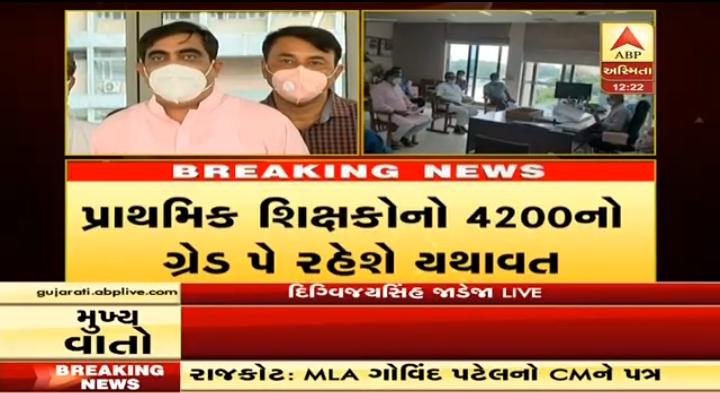 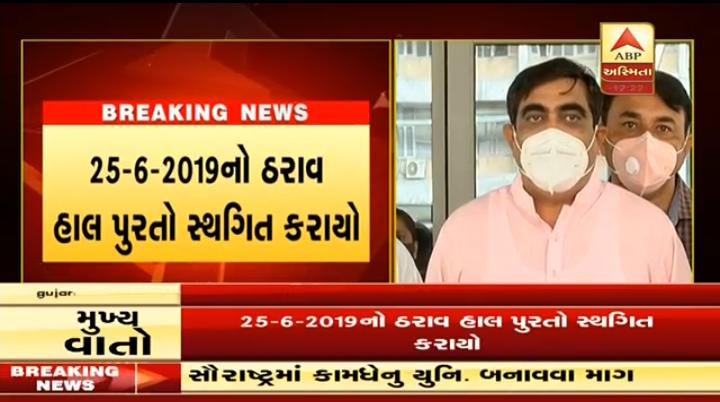 The President of Taluka Primary Teachers Union made a presentation to Vikrambhai and conveyed this presentation to the Minister of State for Education. Vikrambhai Madam said, At present, there is a monthly financial loss of Rs 10,000. This loss is very unjust and such teachers get a grade pay of Rs.4200 from all the teachers.

In addition, since the head teachers are currently working as a teacher, clerk and peon in the school, if their rules mention a grade pay of Rs. Khambhaliya MLA Vikrambhai Madam has approached the state education minister to give due consideration to this matter.

In Gujarat, teachers have taken to social media to protest against the Corona virus.

He has also started a one-day symbolic fast in the time of the corona virus and tried to put his demand against the government.

Not only that, the teachers have also shared on Facebook that they have written to Chief Minister Vijay Rupani, Deputy Chief Minister Nitin Patel and Education Minister Bhupendrasinh Chudasama.

4200 Grade Pay has created a page on Facebook called Our Right and teachers from all over Gujarat are sharing photos and videos.

What is the whole controversy?

“At the time of appointment of a primary teacher, there are 2400 grades and 4200 grades in nine years. This is how we were paid as per the earlier circular. That is, our pay scale was as per the salary scale of the education inspector,” he said.

“Instead of promotion of Education Inspector on 31-01-2019, two new posts have been created. H-TAT and Taluka Primary Education Officer. To give. ”

He further said that the pay scale of both the education inspector and H-Tat is the same. Hence this discrepancy has arisen.

Hardas Ram, who works as a teacher in Junagadh district, says, “Earlier, 4200 grade pay was given when a nine-year job is done. Teachers who were hired before 2010 have got that grade pay.”

Lakhabhai Sundavadra, a school teacher from Ranavav taluka in Porbandar district, said in a video that “primary teachers used to get promotion as education inspector. Gujarat government has started separate recruitment of head teachers. As a result, HTAT teachers get promotion and old primary teachers do not get education inspector promotion.” That’s why the finance department has refused to pay a grade of 4200. ”

Attempts were made to speak to Gujarat Education Minister Bhupendrasinh Chudasama on the phone several times in this regard, but he could not be reached.

So Gujarat Deputy Chief Minister Nitin Patel refused to say anything on the matter over the phone.

So with the slogan ‘I am with the teacher’, the main spokesperson of the Congress, Dr. Manish Doshi started a symbolic fast at his residence on Thursday in support of the teachers ’demand for 4200 fair grade pennies.

Dr. Manish Doshi said, “Concerned about the deteriorating level of education in Gujarat and keeping in view the current situation to support the just demand of 4200 pay grade of teachers, I have started fasting at my residence.

He said that the government should focus on improving the education system in Gujarat. The government will immediately start the recruitment process while thousands of youngsters are waiting for recruitment.

The matter was discussed between the teachers union and the government and there was talk of finding a solution between them.

Digvijay Singh says that we had a meeting with the government and they wanted to take departmental examination for 4200 grades.

“We have had two meetings with the government and both times we have talked about a positive outcome. We have talked about the discrepancies, the technicalities of the finance department, and making quick decisions by discussing them,” he said.

Speaking to BBC Gujarati, teacher Lakhabhai Sundavadra said, “The demand of teachers is that those who are appointed after 2010 should get a gray pad of Rs 4,200.”

“For the last one and a half years, we have talked to the government through various organizations in Gujarat. We have also given applications at the district and taluka level. The campaign is also running on social media. We have also started a symbolic fast.”

Lakhabhai says that with this circular, about 65,000 teachers in Gujarat suffer a loss of eight to ten thousand per month.

Lakhabhai says through the video that “teachers are doing other things in Corona’s time and beyond. So what they have done is 2800 out of 4200. It is an injustice. And if there is no solution soon, the teachers themselves will start a movement.”

What do teachers do besides teaching?

Speaking to BBC, Mahesh Vania, who is working as a teacher in Surendranagar district, said that this decision of the government is unfair for teachers.

They say that teachers have to do many things other than teaching.

“This government does not want to give anything to the employee, instead of increasing the grade, it is reducing it. The seventh pay commission has been adopted but not fully adopted. Even in this, the salary is less.”

Mahesh Vania has also given a list to BBC Gujarati, in which teachers have to do some work.

– Welfare fairs, celebration of all festivals, rotation of chariots, reception programs of leaders

It may be mentioned that last year, teachers from all over the state tried to surround the Legislative Assembly on the issue of compulsory work and other issues other than education. There was also a confrontation between the police and the teachers at this time. Then again the teachers have launched a campaign with 4200 grade pens.