Chief Minister Vijay Rupani today said that the judgment given by the state high court will be implemented in the state from tomorrow. Rupani has announced that people wearing masks in public will be fined Rs 1,000 from Tuesday, August 11 in the state. He appealed to all the citizens of the state not to crowd out the upcoming festivals including Janmashtami as the Koro transition is so widespread, so all the citizens should stay at home and celebrate the festival to prevent such an outbreak. 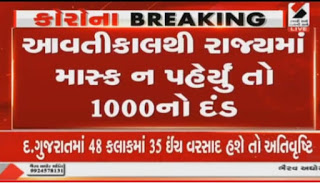 on July 24 directed the government to impose a fine of Rs 1,000 on Suomoto after hearing Corona’s care in the Gujarat High Court. People are walking around without wearing masks and maintaining social distance due to ignorance. The High Court had asked the government to levy a fine of Rs 1,000 on those who did not wear masks. No need to worry about people’s resentment. Strict decisions should be taken in the public interest. The mask is most necessary to avoid corona. Without it people would not be able to run it. The High Court said it was the responsibility of the government to ensure that everyone came out wearing a mask.

Penalties on masks and spitting in public Different

states are trying different measures to curb the epidemic of corona, but there is a huge gap between the penalties imposed by each state on spitting in public and not wearing masks. In a small and backward state like Jharkhand, Rs. Some states have imposed a penalty of only Rs 200, while West Bengal has imposed a penalty of Rs 200. A fine of Rs 50 is levied.