amalpur-Khadia MLA Imran Khedwala’s family members also received positive
Jamalpur-Khadia legislator Imran Khedwala’s corona report was taken positive after his family and activist samples were taken. In which 5 members of the family have come positive. Imran’s family will be declared positive include his brother, sister-in-law, two nieces and nephew’s wife. All have been taken to SVP Hospital. The report of MLA Shailesh Parmar and other activists who were with him is still pending.

Amit Shah asked about the information of the constituency workers
Union Home Minister and Gandhinagar MP Amitabhai Shah has called in some constituencies and leaders in his constituency and asked for a gap. The activists of Gandhinagar and Gujarat and with the attention of the masses, advised to implement lockdown to protect the corona and keep everyone safe.

Three more positive cases were reported in Botad, the total number in the state reached 874A
The number of coronas-positive patients in the state is constantly increasing. Three more positive cases have been reported in Botad. At the same time, the total number of positive patients has increased to 874. Earlier, Health Principal Secretary Jayanti Ravi said that there were 105 new cases in the state. Of these, 42 cases were registered in Ahmedabad, 35 in Surat. A total of 64 people have been discharged in the state. While the dead have risen to 36 with three new deaths. In the state, 2971 tests have been done in 24 hours. Health Minister Jayanti Ravi said that 20204 tests have been done so far. 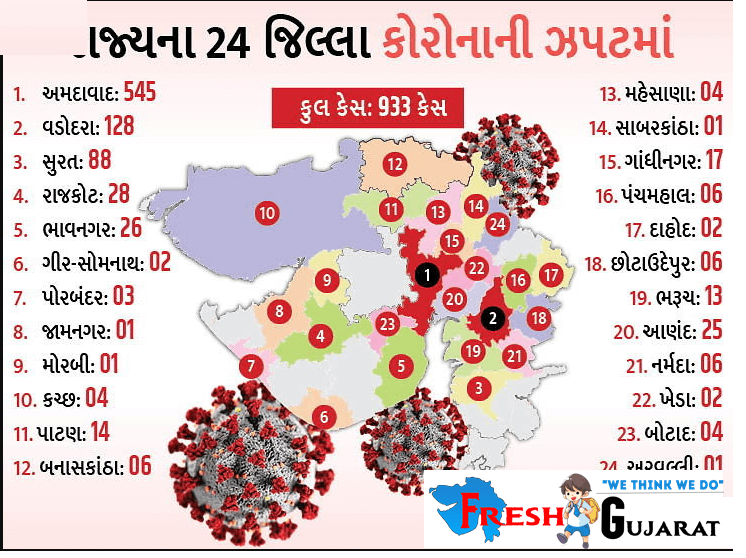 he state has 933 positive cases, 36 deaths and 73 discharges

> Avoid contact with the public who has corona symptoms or who has been tested and results are pending.

> Quarantine all the patients exposed to the Corona Positive Report and also test them.

> Anyone who has undergone a corona test should not touch anyone until the result is released, do not go closer than 1 meter.

> Keeping the patient who was positive for Corona report in complete isolation at Covid Hospital for 14 days.

> If all mild cases cannot be taken to a health facility, quarantine them at home or elsewhere based on risk factors.

> Anyone who has come in contact with a corona positive patient should undergo a repetitive corona test within 14 days.