The world famous rathyatra of Lord Jagannath Rath yatra live takes place on the day of unripe seeds. However, the 142-year-old tradition in Ahmedabad has broken for the first time. Today the Lord will not go out on the township and the chariot will be circled around the temple in a rathyatra. Chariots will not be taken out of the temple complex. Besides, no devotee will be allowed to enter all the rituals. 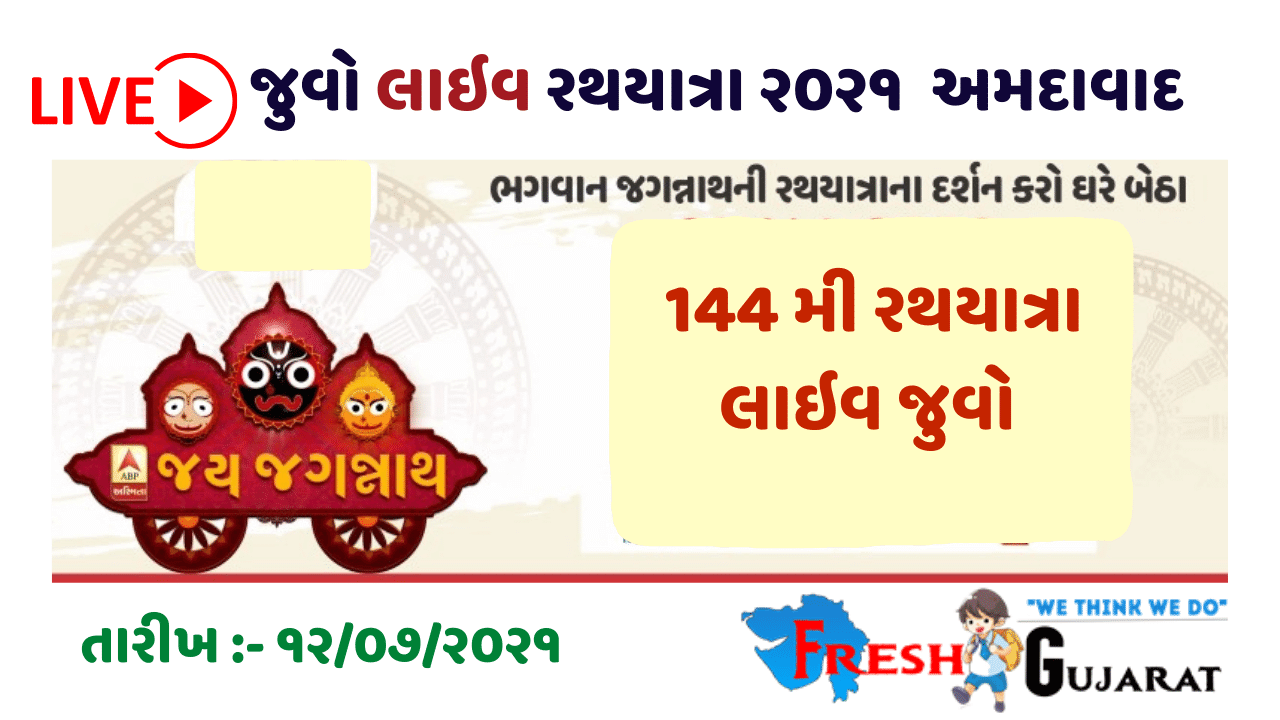 – CM Vijay Rupani cleaned the way of Lord Jagannathji’s chariot with a gold broom. The three chariots will then depart, although the chariot will orbit the temple complex.
– CM Bijal Patel, Pradipsinh Jadeja are also present along with CM Vijay Rupani.
– CM Vijay Rupani reached Jagannath Temple with his wife Anjali Rupani. Pahind will perform the ritual in a few minutes.
– Gajraj was worshiped in the temple premises.

The procession of Lord Jagannath, the pride of Gujarat, traditionally takes place in Ahmedabad every year on the day of Ashadh Sud Beej. In this rathyatra, which is considered a symbol of Hinduism, Lord Jagannath, Balram and sister Subhadra set out on a city tour in a chariot.

Lord Krishna went out of Dwarka with his brother Lord Balram . When Krishna 16108 ranioe Rohini her (Balarama’s mother) asked that we serve the same Lord Krishna, however, the day Lord Krishna and Radha is why the name. Then Rohini’s mother said if Krishna and Balram do not enter the palace, I will say.

The queens thought to SubhadraHe stood guard outside the door and said not to let anyone in. Then Rohini’s mother started the story. Subhadra kept his ears on the door and started listening to the story inside. When Krishna and Balram came back, they saw Subhadra standing at the door with his ears open.

When Krishna and Balram went to enter the palace, Subhadra stopped them. So Krishna and Balram like Subhadra kept their ears on the door and started listening to the story inside. Suddenly, due to the spirit of devotion, the arms and legs of the three began to shrink and the eyes began to widen.

What Is Nam Of Jagannath Rathayatra 2021 ?

Lord Jagannatha’s chariot is called Nandighosa. It is forty-five feet high and forty-five feet square at the wheel level. It has sixteen wheels, each of seven-foot diameter, and is decked with a cover made of red and yellow cloth.

How old is rath yatra?

hy is the offering of Mugan to the Lord in the Rathyatra?
Lord Jagannath had an eye disease. After the disease was cured, they came to the town by chariot to pay obeisance, at which time all the devotees offered mugs and purple offerings to the Lord. Because mug and purple relieve eye disease. So that the rathyatra has mugs and jambus.

Unripe seeds are the time of onset of monsoon. Bacteria that affect the eye are prevalent during this time. An eye infection is known in medical science as conjunctivitis. Based on the tradition of Rathyatra,

it can be assumed that there would be a clear identification of this disease and its cure even in ancient times. Because, in the story of Puranas, it is said that even God Himself got eye disease. And in the prasad of rathyatra also mugs and jambus are given, which is different and special than the prasad offered normally.

According to Ayurveda, mug and purple are naturally very beneficial for blood purification of the eye.

Dharmadhaja is always flying in the opposite direction of the wind from the Puri Temple .
– Sudarshan Chakra above the temple can be seen from any area of ​​Puri.
– Normally air comes from sea to land and in the evening air goes from land to sea but in Jagannath Puri this phenomenon is quite the opposite.
– Not a single bird has ever been seen flying over this temple.
– The shadow of the main peak-dome, cannot be seen in any direction during the day.
– Here is the largest kitchen in the world for making mahaprasad. 500 cooks and 300 associates work for Mahaprasad.
– Seven very large vessels are placed on top of each other to make cooking in the temple. Prasad is made by burning wood at the bottom of the lowest pot. Notably, cooking is done first in the topmost container, and cooking is done last in the lowest container.
– As soon as you enter the gate of the temple, the sound of the sea stops being heard. As you come out of Singhadwar, you can hear the roar of the sea all over Puri.
– This flag is changed every evening by a human being climbing over the temple. The flag bears the sign of Shiva’s moon.

In View of the prevailing situation in Corona, it has been decided to hold a Rath Yatra 2021 Ahmedabad as per specific guideline. The processing of idols of Jagannathji, Baldevji with three different Rath will leaves at 7 and return to Nijmandir by 12 noon.

A curfew has been imposed for the Gujarat Rathyatra 2021 this year due to the second wave of corona. At the same time, keeping in view the Corona, the procession will be completed on time. The procession is planned to be completed in 5 to 6 hours. Intensive planning has been done about how long it will take for the chariot to leave the temple and return to the temple. Accordingly, the sailors pulling the chariot have been instructed.
Post Views: 53
Tagged:
rath yatra 2020, rath yatra drawing, rath yatra essay for class 4, rath yatra history, rath yatra news
Rating