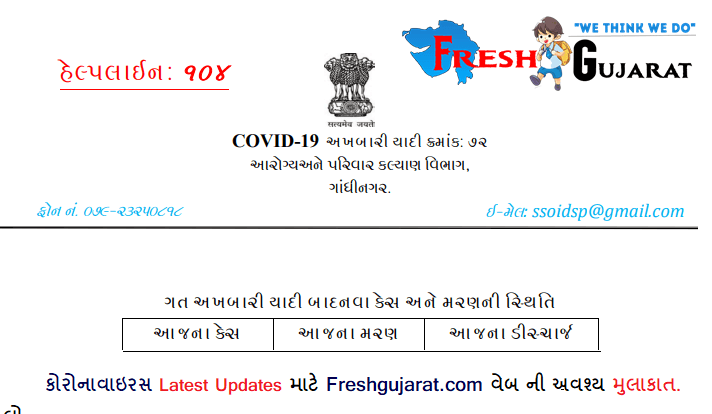 Giving an update on Corona, Jayanthi Ravi, Principal Secretary, State Health, said that 308 new cases of Corona positive have come up in the state in the last 24 hours. These include 234 in Ahmedabad, 31 in Surat, 15 in Vadodara, 11 in Anand, 4 in Panchmahal, 3 in Rajkot, 3 in Navsari, 2 in Bhavnagar, 2 in Gandhinagar, 1-1 in Mehsana, Botad and Mahisagar. While 9 in Ahmedabad, 3 in Vadodara, 3 in Surat and 1 in Rajkot, a total of 16 patients have died. Out of a total of 4082 patients, 34 are on ventilator and 3324 are stable. While 527 patients have recovered they have been discharged and a total of 197 patients have died so far. So far 59488 tests have been conducted in the state, out of which 4082 reports are positive and 55046 are negative. Another good thing is that there is not a single active case in Porbandar, Jamnagar and Morbi. However, there is no need to be happy about this, but you need to be very careful.

Significant events since the morning of April 29th

After a long struggle, the Gujarat government finally stopped testing with the Rapid Kit

Tuwer will be procured by the government, from May 1 to May 5: Ashwini Kumar

The water situation in the state was discussed by the Chief Minister. In which the state has been asked to plan in such a way that drinking water problem does not arise. Responsibility for this has been assigned to the District Collector. Chief Minister’s Secretary Ashwini Kumar also said that all head pumps should be repaired immediately. He further said that the purchase of Tuvar will be initiated by the government. The government will buy tuver from May 1 to May 5. For this, registration has been done by the farmers from 1st December to 31st January. In addition, the remaining 12 thousand farmers will also benefit. Chickpeas and rye will be procured by Gujcomasol.
Six cities in the state were declared red zones
Rajkot, Ahmedabad, Surat, Vadodara, Patan and Bhavnagar have been declared as red zones. Also, CM Rupani has called a meeting of ministers to discuss the opening of the lockdown on May 3.

A total of 4082 deaths, 197 deaths and 527 discharges (according to government figures released every 24 hours).